Catalonia the entrance door of the cultivation to the Iberian Peninsula

Different studies based on commercial references and fiscal archives have revealed the extraordinary development of saffron cultivation in Catalonia during the Middle Ages. In the market of the Principality, 10 kg of saffron could have had an approximate value of 500 to 1,000 solidi of Barcelona, as opposed to 1,200 lbs of wheat produced in the same area of land and which in normal conditions could have been worth from 110 to 240 solidi of Barcelona.

In addition to its high yield there were other advantages that positioned saffron as a Catalan product of prestige and export: 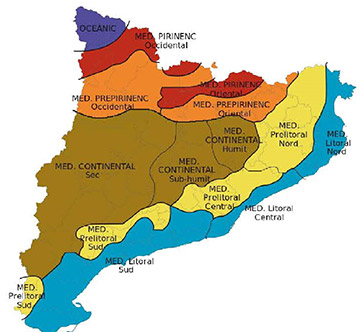 Although the first news related to the cultivation of saffron in Catalonia dates back to 1287 in Cerdanyola del Vallés, many documentary references show that in the mid-13th century Catalan saffron already had excellent prestige in markets throughout the Christian West, Eastern Mediterranean and Baltic countries.

This positioning, however, was shortened by the outbreak of the Catalan Civil War (1462 - 1472), which caused a shift of the saffron trade centres towards Zaragoza and Valencia. After the civil conflict, the Principality tried to regain its leadership but Aragonese saffron already had taken over Catalan production.

Even so, the positioning of Catalonia as producer and exporter remained until the end of the 15th century. Little by little, the native production was declining to become an almost symbolic production that endured due to self-consumption.

The saffron comes from Asia Minor and there are data that used it 2,000 years B.C?

In Spain it was introduced by the Arabs between the 8th and 10th centuries. From the beginning its main use was culinary, something that spread throughout all Mediterranean countries

Catalonia was the gateway of saffron to the Iberian Peninsula, and it was the first region of Spain that, during the Middle Ages, cultivated and exported the first saffron recognized for its excellent quality

The magnificent properties of saffron make it a versatile spice used in different fields? In addition to gastronomy, saffron is currently used in medicine, cosmetics and perfumery

The saffron have a great source of vitamins that help improve the quality of life? It has been shown to even have beneficial effects in the fight against degenerative diseases such as Alzheimer's and multiple sclerosis

To get 1 kg of saffron, do you need about 200,000 flowers? The flower, which lasts only one day, has inspired numerous mythological tales, legends that have been born in the oldest civilizations.

We employ cookies to ease your experience in navigating our website. If you vist our website as a guest, we understand that you give your consent for the use of cookies. You can obtain more information about cookies and their use here.